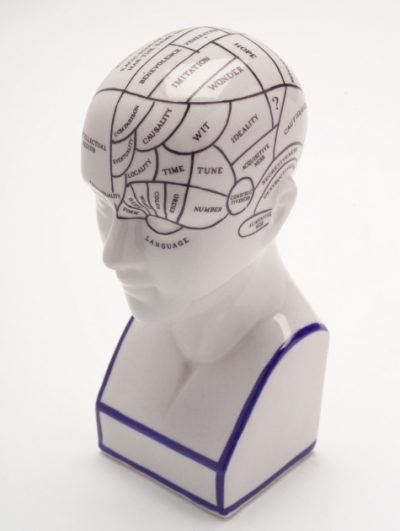 What Phrenology can teach us about creative thinking

By Nige Collin | Innovation | No Comments

Back in the late 1700s, a revolution happened in the science of the mind. Concerned with determining a person’s psychological attributes or personalities, such as creative thinking ability, it was known as phrenology. It would do this by merely taking head measurements and feeling their skull for the size of bumps and indentations. The principle behind it was that the brain was divided into different segments. Each of which related to a different psychological attribute. How strong that characteristic or attribute was would be determined by the size of that segment. It followed that a large bump pointed to a stronger trait.

For if you are a good creative thinker then that part of your brain would be more developed. As a your skull would have an outward bump to accommodate the extra creative grey matter.

In other words, you could tell a lot about someone, including what they were good at, simply by feeling the bumps on their head. Sounds reasonable. Introduced by Franz Joseph Gall in 1769, it wasn’t until the early 1800s that the science of Phrenology gained momentum and became fashionable among those wanting to be seen as advocates of the scientific method.

Even today L. N. Fowler’s classic phrenology busts are commonly displayed in public spaces and offices. I have one in my own studio, the bald ceramic skull segmented by lines and descriptions defining different ‘organs’ of the brain relating to particular personality attributes. A dominant bump on the top right of your forehead indicates great foresight; a large bump immediately above your left ear suggests destructive tendencies. Fowler himself wrote, ‘For thirty years I have studied crania and living heads from all parts of the world and have found in every instance there is a perfect correspondence between the of the healthy skull of an individual and his known characteristics’.

Of course, we now know that phrenology had absolutely no basis in fact and that there was never any scientific evidence to support it. So why do people like me (and perhaps you) still proudly display replicas of Mr Fowler’s creation (my kids call him George)? Well, I guess they are kind of cool, and a tad retro. Innovation never stops – it evolves.

It serves as a reminder that we are better at creative thinking than we give ourselves credit for. And as a reminder that just when you think you know everything and you’ve got it right, somewhere, somehow, someone knows more than you and has done it better than you. It reminds me that there is always a second right answer. And that you need to keep an open mind and keep looking for new ideas, new perspectives, new concepts and new empirical evidence.

The truth is, we don’t know everything and we never will; and if you want to improve yourself and your business, you need to be constantly improving your skills and your knowledge.

In the ‘Game of Inches‘, you need to be forever learning. It’s another one of the things all the successful people I have spoken with and read about have in common. They are curious, inquisitive, constantly seeking out knowledge. Commonly seeing learning not just as an academic pursuit but as an integral part of their lives that takes many forms and has many sources. It forms the basis of my keynote presentations